This is a test message!
coal-power
3
Home
Energy Categories 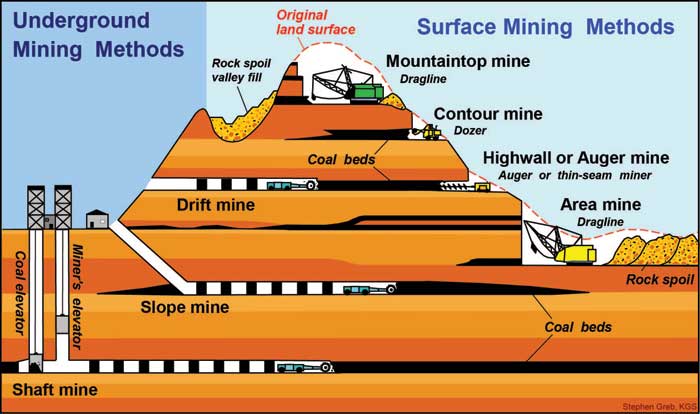 
Coal is mined by two primary methods depending on how close the coal seam is to the earth's surface. When the coal seam is shallow, the top layers of soil are removed to expose the coal. This is done using a piece of equipment called a dragline excavator, which is the largest crane built. If the coal is far from the surface, vertical or slanted holes ("shafts") are cut down to the mining area for transporting the miners, equipment, and coal and for ventilation. (See Figure 1). The most controversial technique is called mountain top removal, a form of surface mining, and is primarily used in the Appalachian Mountains. As its name implies, the entire top of a mountain is removed to expose the coal seam. The soil and rock spoils are then, more often than not, dumped into valleys. Federal law requires the land to be reclaimed to match the original contour; however, that is almost impossible for this type of mining. Critics claim that mountains are flattened and valleys and streams filled in, destroying the environment and the aesthetics of the countryside. See the OWOE topic: Why is mountain top removal harmful to the environment?.

Try an OWOE eTool!
Solar panel and wind turbine power calculator
Determine the amount of energy produced by a solar panel or a wind turbine anywhere in the world.
State Solar Power Rankings
This website ranks the 50 states and the District of Columbia, from best to worst, based on their solar-friendliness.
Energy Calculators
From gallons to British thermal units (Btu), kilowatthours to megajoules - this handy calculator converts from one energy unit to another.