This is a test message!
cool-tech
14
Home
Energy Categories 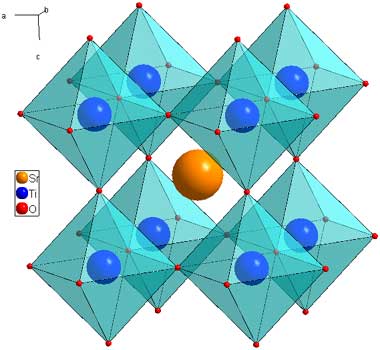 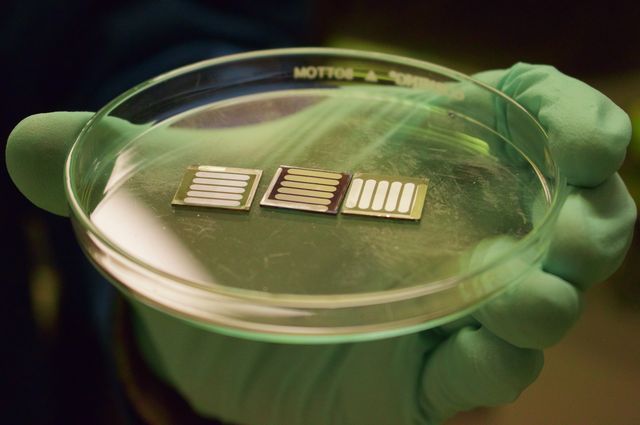 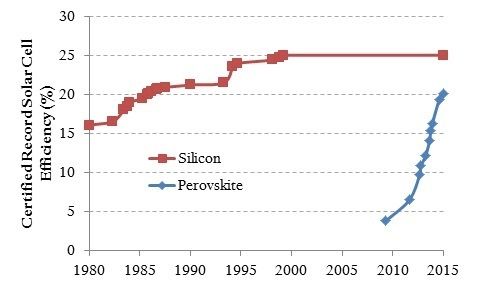 
In the context of modern solar cells, perovskite is a synthetic material that has the same crystalline structure as the naturally occurring mineral perovskite, first found in the Ural Mountains of Russia in 1839. The mineral perovskite is a calcium titanium oxide with formula CaTiO3. The more general perovskite structure is ABO3 where A and B are cations, i.e., positively charged ions, and O is oxygen. In the most symmetric form of the material, a cubic configuration, BO6 octahedra (a B cation surrounded by 6 oxygen atoms) are connected at the corners indefinitely in 3 dimensions. An A cation fills every hole created by 8 octahedra. (See Figure 1 for the example SrTiO3.)

The first indication that perovskites had potential as solar cell material was published in 2009 by Tsutomu Miyasaka from the University of Tokyo in the Journal of the American Chemical Society. Miyasaka and his coworkers found that two perovskite nanocrystals sensitized a titanium dioxide (TiO2) layer and converted visible light conversion to electricity. Although this arrangement resulted in only a 3.8% power conversion efficiency and was only stable for a few minutes, it opened the door on a new area of reasearch and led the way for rapid technological advancements. See video for more details on perovskite solar cells.

Perovskite solar cells have a number of advantages over silicon cells. While both consist of abundant and inexpensive materials, silicon cells require expensive manufacturing processes which include vacuum chambers and high temperatures. Perovskite cells can be manufactured using chemical processes at relatively moderate temperatures. One technique creates a liquid substance which can be painted on a surface and left to dry or even printed. It is also possible to tune the perovskite material to different light frequencies by slightly modifying its chemical composition. Thus perovskites can be manufactured into solar cells that are flexible, semi-transparent, or colored.

A major problem with synthesized perovskites is their tendency to fall apart when exposed to air, especially humid air. However, recent work at UCLA (published in 2016) has found a way to dramatically increase perovskite longevity by protecting the cell between two layers of metal oxides (see Figure 2). This new configuration extends the cell's effective life in air by more than 10 times, with only a marginal loss of efficiency converting sunlight to electricity. More recently (January 2018), the NREL announced another breakthrough in preventing degradation to the solar cells.

Several companies are pushing ahead to be the first to offer commercial grade perovskite solar cells. Oxford PV, a company spun off from Oxford University in 2010, has created a two-layer sandwich cell with perovskite over silicon that has achieved 28% efficiency. That's pretty impressive considering that the theoretical maximum efficiency for a simple silicon cell is 29%, it was just 2015 that perovskite cells in the research lab exceeded 20% efficiency (see Figure 3), and most commercial panels installed today are in the 15-17% range. Oxford PV expects to be able to mass-produce silicon-and-perovskite cells and package them together into standard-looking panels for delivery by the end of 2020.

To find out the climate impact of what you eat and drink, choose from one of the 34 items in the calculator and pick how often you have it.
eGallon Tool
eGallon: Compare the costs of driving with electricity in your state
Solar Financing Tool

See a breakdown of the costs of solar panels and learn how to reduce installation costs by taking advantage of tax credits.