This is a test message!
introduction-to-energy
2
Home
Energy Categories

Blog
About Us
Privacy Policy
Contact Us
OWOE - Introduction To Energy - What does the future of energy in the United States look like?
Figure 1 - Change in generation and energy efficiency savings under the Clean Power Plan (EIA) 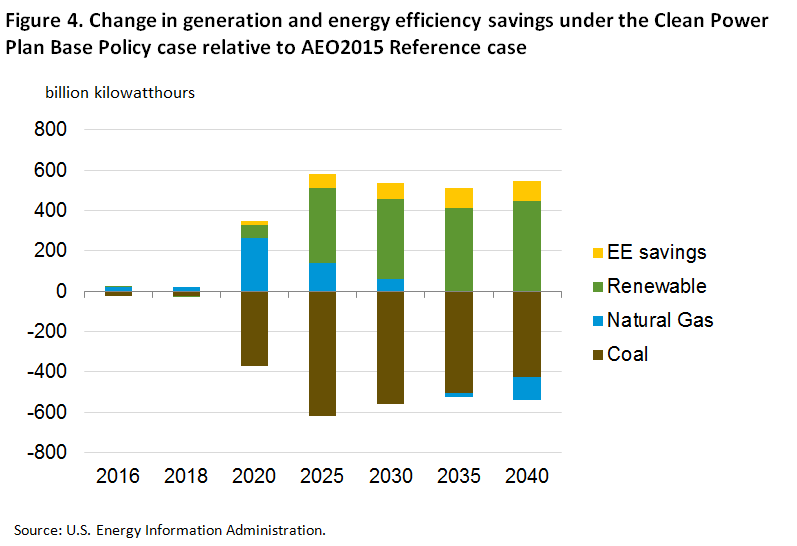 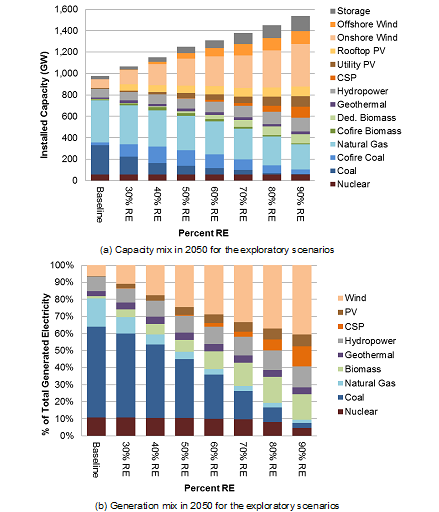 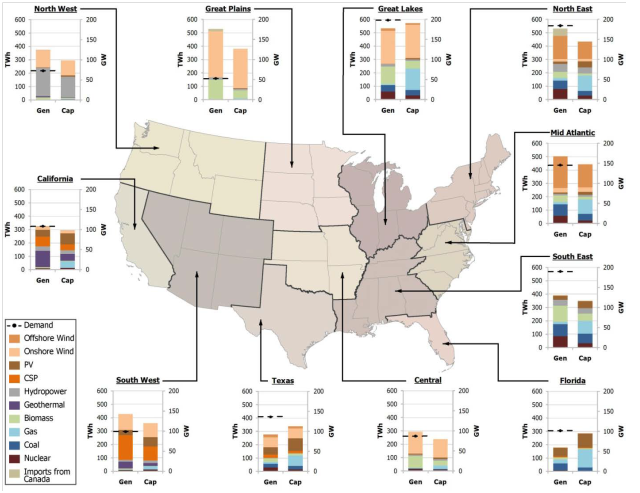 Figure 3 - 80% Renewable generation and capacity in 2050 by region (NREL)
What does the future of energy in the United States look like?


The United States is in the early stage of a new energy revolution that will ultimately change how we get our energy and how we use it. Today, fossil fuels make up approximately 80% of our energy sources. However, the fact that fossil fuels cannot be easily replaced, concerns over climate change and the environment, and the rapid advance in technology associated with renewable energy sources, are moving the country away from fossil fuels. In 2014 approximately half of all new power generation capacity came from wind and solar installations, in 2015 it was 65%, and in 2016 it was 62%. This trend should accelerate in the future, as the cost of new renewable power continues to fall.

In August 2014 President Obamba and the EPA presented the Clean Power Plan as the United State's regulatory tool to address climate change. The plan's primary focus is on carbon dioxide emissions from power plants with key goal to cut carbon dioxide emissions from the power industry to 32 percent below 2005 levels by 2030. In order to achieve the goals of this plan the energy mix in the US will need to undergo a fundamental change. The Energy Information Administration (EIA) anticipates that switching from coal-fired generation to natural gas-fired generation is the predominant compliance strategy as implementation begins, with renewables playing a growing role in the mid-2020s and beyond (see Figure 1). Ultimately, most of the electricity produced by both coal-fired and gas-fired power plants will need to be replaced by renewables. This will require a dramatic increase in wind and solar, both utility-scale and rooftop, as well as biomass power generation capacity. Such a large shift from fossil fuels will require significant investments in the electrical power infrastructure of the US, such as the cost of the new facilities and cost of adding transmission lines to new generating areas. These additional costs are anticipated to be more than offset by reductions in premature deaths, savings in health care costs, and savings associated with climate change at a rate of about $4 savings for every $1 invested.

Some of the fundamental premises of the Clean Power Plan are derived from the 2012 National Renewable Energy Laboratory (NREL) study titled Renewable Electricity Futures Study, which explored the implications and challenges of achieving various renewable electricity generation levels by 2050, with the focus on 80%. Although such a high level of renewable electricity has significant challenges, primarily due to geographical distribution and variability and uncertainty in output, the study concluded that 80% renewables by 2050 could be achieved and would be robust against constraints in transmission, flexibility, and resources.

The study uses an overall mix of electrical generation as 50% variable renewable, with 38% wind, 6% photovoltaic solar, and 6% concentrating solar power, and 30% dispatchable renewables, with 15% hydropower and 15% biomass. The remaining 20% is conventional energy sources, and only a small percentage of storage is included. Figure 2 shows the assumed energy mixes at each level of renewable energy for both total generation and percent total. Figure 3 shows how the 80% scenario would look on a regional basis across the US. For example, the Pacific Northwest would rely more heavily on hydropower, California and the Southwest on solar, the Central Plains on wind, etc.


EIA "Analysis of the Impacts of the Clean Power Plan"

Examine electricity generation and demand data for the EU and UK and model how systems could operate in the future.
State Wind Energy Facts (Interactive map)
Learn the top wind energy facts about each state by clicking or hovering on the state's map.
State Solar Power Rankings
This website ranks the 50 states and the District of Columbia, from best to worst, based on their solar-friendliness.