This is a test message!
solar-power
2
Home
Energy Categories

Blog
About Us
Privacy Policy
Contact Us
OWOE - Solar Power - How do photovoltaic cells work to generate electricity?
Video 1 - US Dept of Energy - Energy 101: Solar PV 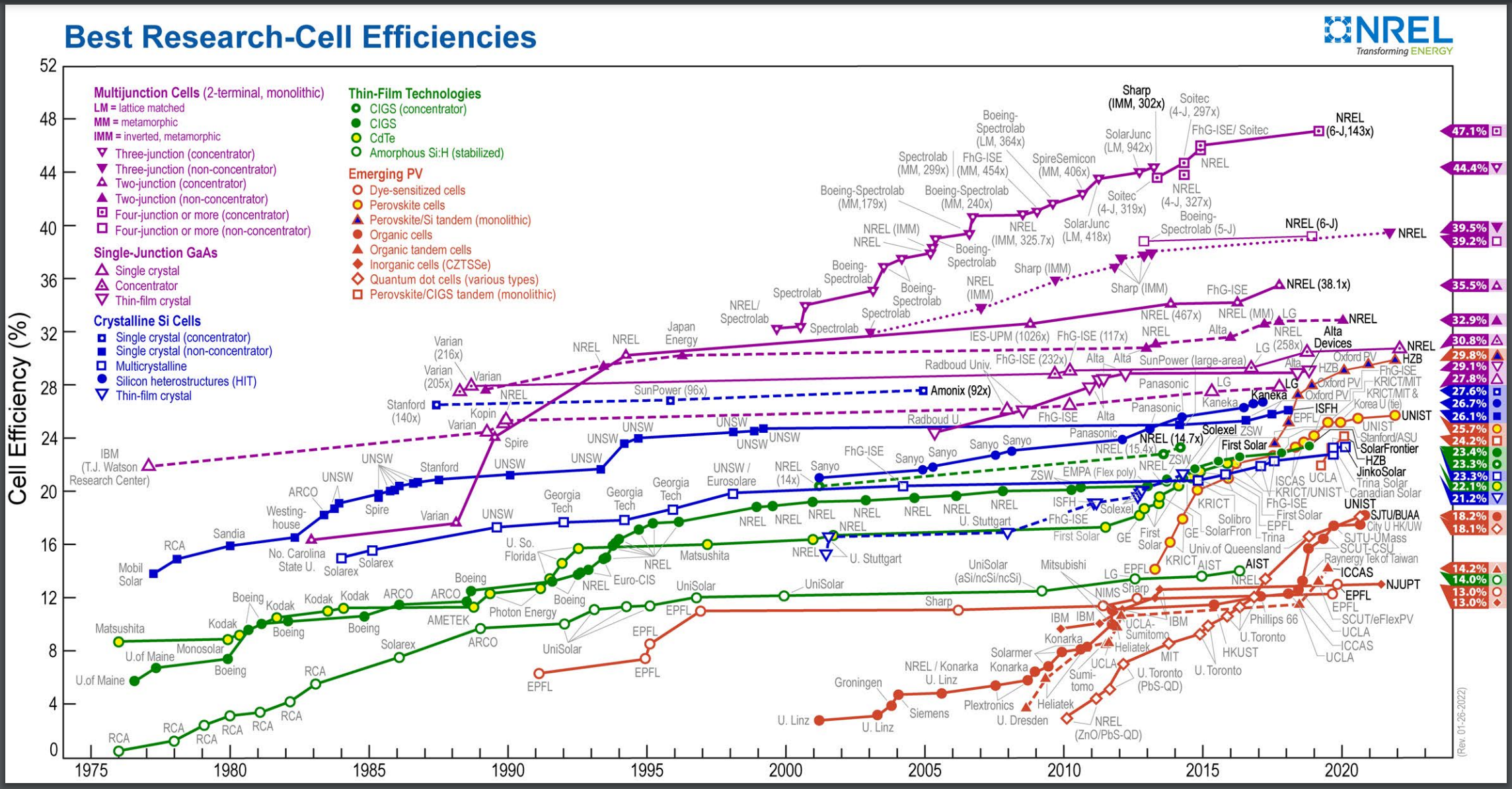 
Photovoltaic (PV) solar cells contain semiconductor materials that give off electrons when they absorb solar energy. When light shines on a PV cell, the energy from the absorbed light excites the electrons in the atoms of the PV cell semiconductor material. With this new energy, the electrons escape from their normal positions in the atoms and are captured within an electrical circuit created by sandwiching two layers of the silicon semiconductors. See Videos 1 and 2 for more detail on how PV cells generate electricity.

The US Department of Energy (DOE) National Renewable Energy Laboratory (NREL) funds research into development of photovoltaic cells and in May 2022 announced a new solar cell with a record 39.5% efficiency under 1-sun global illumination (i.e., not under concentrated solar energy). Efficiency is the percent of solar energy that is captured and converted into electrical energy. The so-called "quantum well" solar cells utilize many very thin layers to modify solar cell properties and are implemented into a device with three junctions, where each junction is tuned to capture and utilize a different slice of the solar spectrum. This is the highest efficiency solar cell of any non-concentrator type as shown in the NREL chart (Figure 1) that tracks the highest confirmed conversion efficiencies for research cells for a range of photovoltaic technologies, plotted from 1976 to the present.

Crystalline silicon PV cells are the most common photovoltaic cells in use today (blue lines in Figure 1) in current commercial panels produced by companies such as Jinko Solar or Trina Solar and have efficiencies on the order of 23%. Researchers are also looking into a number of other materials with the goal of making more efficient and less expensive cells. For example, see OWOE: A new solar PV material - perovskite.

An individual commercial-grade PV cell produces about 1-2 watts of power. Multiple PV cells are connected to create solar modules, and multiple modules are connected into solar panels or arrays. (See Figure 2) Although photovoltaic cells work best on sunny days, they can also produce electricity when it is cloudy. However, they will not produce electricity in the dark.

A typical 150 watt solar module for a home rooftop solar system is about 10 square feet (approximately 1 meter square) in size and can be expected to produce about 0.75 kW-hours every day assuming 5 hours of sunshine per day and 15% solar energy conversion efficiency. The average home in the United States uses approximately 30 kW-h of electricity per day. This would require about 400 square feet total of solar modules. See OWOE:What is the average size of a rooftop solar system?).

Try an OWOE eTool!
State Wind Energy Facts (Interactive map)
Learn the top wind energy facts about each state by clicking or hovering on the state's map.
Solar panel and wind turbine power calculator
Determine the amount of energy produced by a solar panel or a wind turbine anywhere in the world.
Wind and Solar Data Visualizations
A series visualizations that show such things as capacity, LCoE and PPA prices for utility scale solar and wind installations across the US.