This is a test message!
solar-power
8
Home
Energy Categories 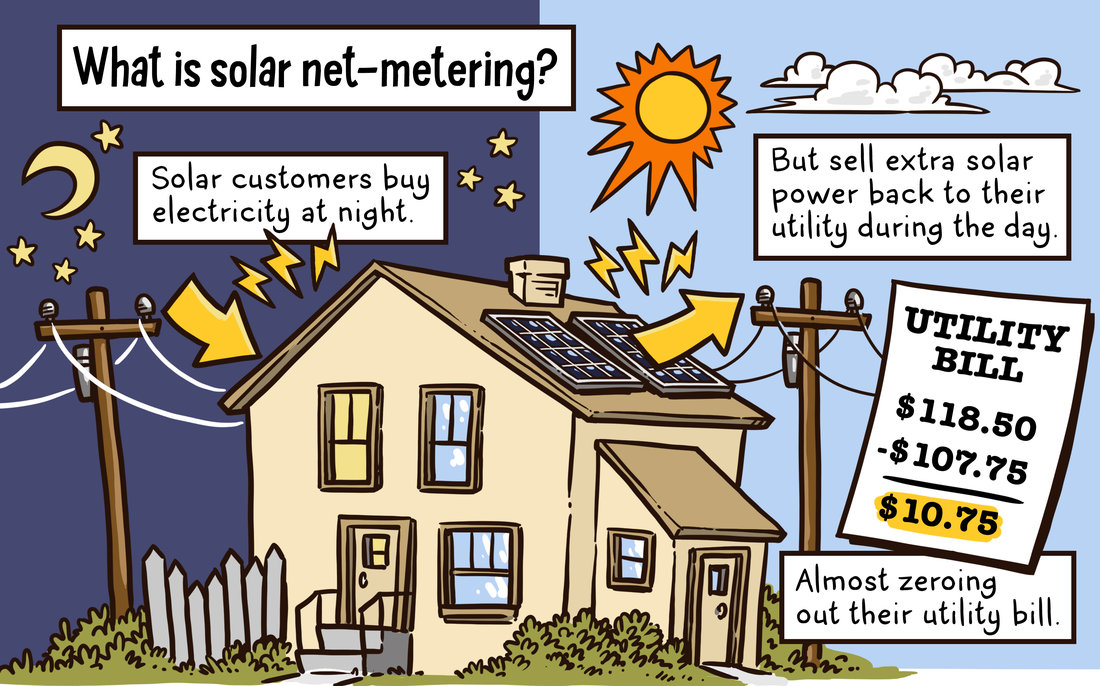 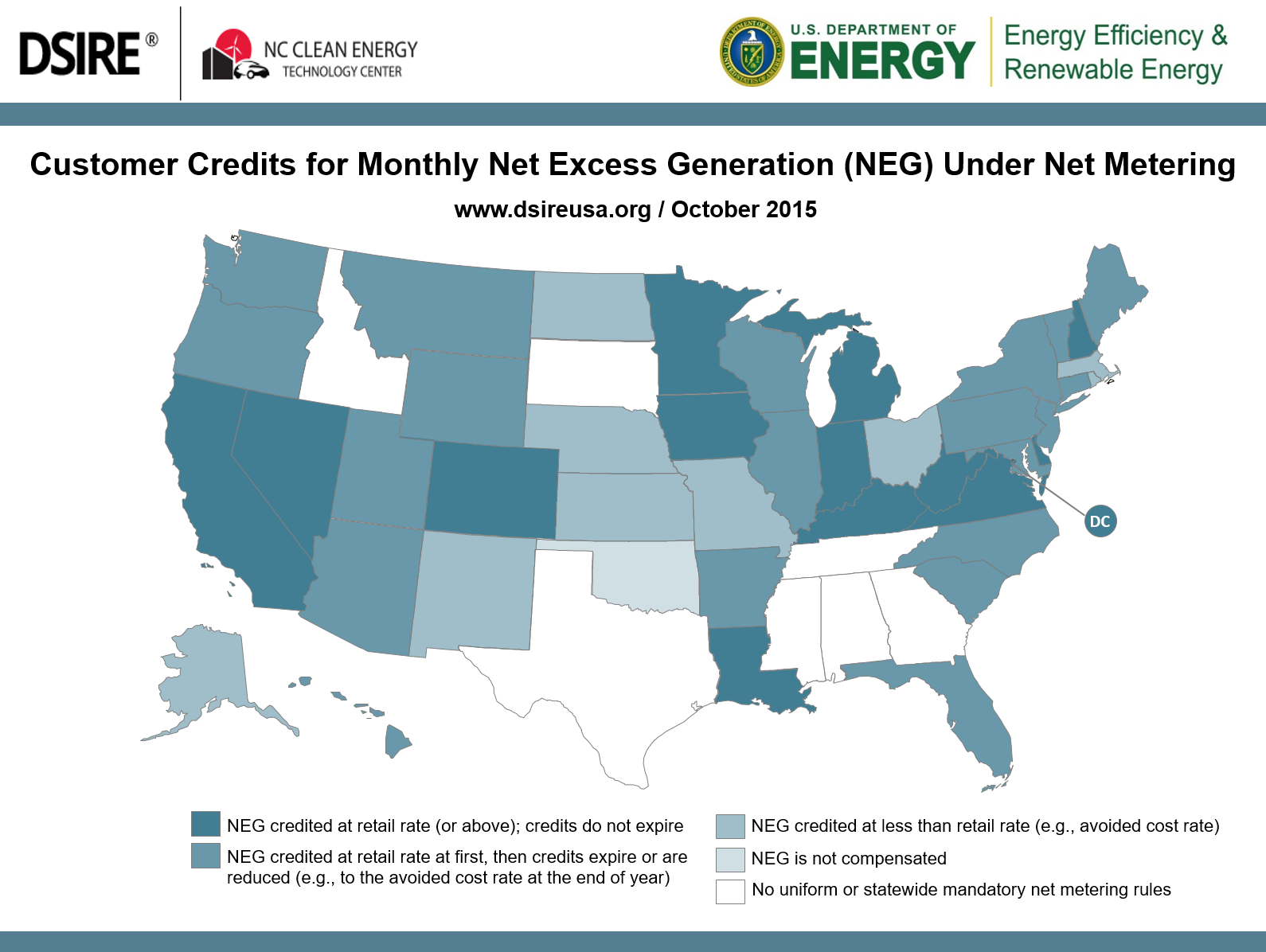 
Net metering is a policy designed to encourage individual consumers to invest in renewable energy. The US Energy Policy Act of 2005 required state electricity regulators to "consider" (but not necessarily implement) rules that mandate public electric utilities make available upon request net metering to their customers.The only special requirement is an electric meter that will run backwards if more electricity is generated than used at any given time. This results in the customer only paying for the "net" energy used, or the difference between grid electricity used less electricity returned to the grid. Over a billing cycle, if a customer returns more electricity than he uses, he receives a credit. (See illusttration in Figure 1.) As of December 2014, 44 states and Washington, DC have passed legislation authorizing net metering. Net metering policies vary widely by state in terms of who can connect, what are acceptable system capacities, how long credits last, how much the credits are worth, etc. Figure 2 shows how the different states value excess electrical generation under their net metering policies.

While net metering appears to be a very straightforward way to handle excess electrical capacity, some utilities feel that it doesn't fairly account for the cost of the electrical infrastructure that they must maintain. In general, the consumer gets electricity credit at retail price. Without some form of tariff on the home owner with an individual system, it is argued that other utility customers pay a higher share of the cost of conventional power generation and transmission facilities. Counter-arguments claim that such individual systems reduce the need for the utility to invest in new power plants, which helps all consumers in the long run.

Two recent confrontations between solar advocates and utility companies highlight the challenges that exist in coming to grips with how to fairly value excess solar generated electricity. In Nevada, under pressure from NV Energy the Public Utility Commission (PUC) voted in December 2015 to dramatically reduce the net metering payments that the electric utilities must pay to homeowners whose rooftop solar panels feed electricity into the grid and to allow the utilities to increase the fees they charge for homeowners to connect to the grid. The changes essentially wiped out any benefit to the rooftop solar system owner, and was made retroactive to existing systems. In response, SolarCity and Sunrun announced that they would withdraw their operations from the state, and the solar industry in Nevada essentially died. After intense public pressure, the legislature passed a new law to restore favorable rates to solar customers, and in June 2017 the PUC issued orders to implement the law. Although the rate that utilities have to pay for generation returned to the grid will decrease over time, overall, the bill was considered a major win for solar.

With less controversy, in 2016 the California PUC revised the state's net metering policy with the new "Net-Metering 2.0". The change was triggered by the three investor owned utilities hitting their 5% cap on "behind-the-meter" generation. The new policy includes a one-time fee for new solar customers to connect to the grid. Customers will also pay a fee of 2 to 3 cents per kilowatt-hour for so-called non-bypassable charges and be enrolled in time-of-use (TOU) rates, which means that their electricity can be priced differently depending upon when it is used or returned to the grid. It is estimated that the average monthly increase in electric bills will be $10. Existing owners are exempted from all the changes for 20 years from when they installed their solar systems and connected to the grid. Utility companies expressed disappointment over the proposal, while some solar advocates praised the proposal for maintaining the fundamentals of net metering and continuing to encourage growth in solar systems.

An alternative to net metering to encourage deployment of renewable electricity generation is the feed-in tariff (FIT).Two electric meters are required - one to measure electricity in and the other to measure electricity out. Customers pay normal rates for electricity in. The FIT then sets a price from the utility for all of the electricity that is generated and provided to the grid. The level of the FIT is typically set by the utility, but can also be mandated by the state. As of March 2014 six states had FIT programs in place via legislation; in addition, a number of utilities such as Dominion Virginia had voluntary programs in place.


DSIRE "Database of State Incentives for Renewables and Efficiency"

Try an OWOE eTool!
Solar panel and wind turbine power calculator
Determine the amount of energy produced by a solar panel or a wind turbine anywhere in the world.
Wartsila Energy Transition Lab

Examine electricity generation and demand data for the EU and UK and model how systems could operate in the future.
DroneQuote