This is a test message!
transportation
6
Home
Energy Categories

Blog
About Us
Privacy Policy
Contact Us
OWOE - Transportation - Are all-electric cars likely to become the future of transportation?
Figure 1 - Electric vehicles per 1,000 registered vehicles (EIA) 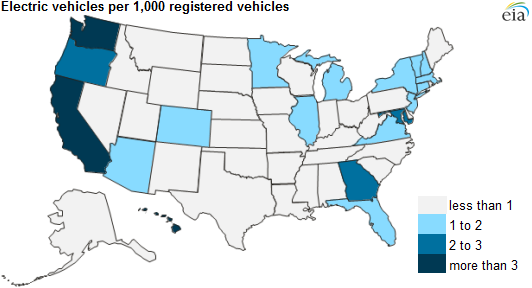 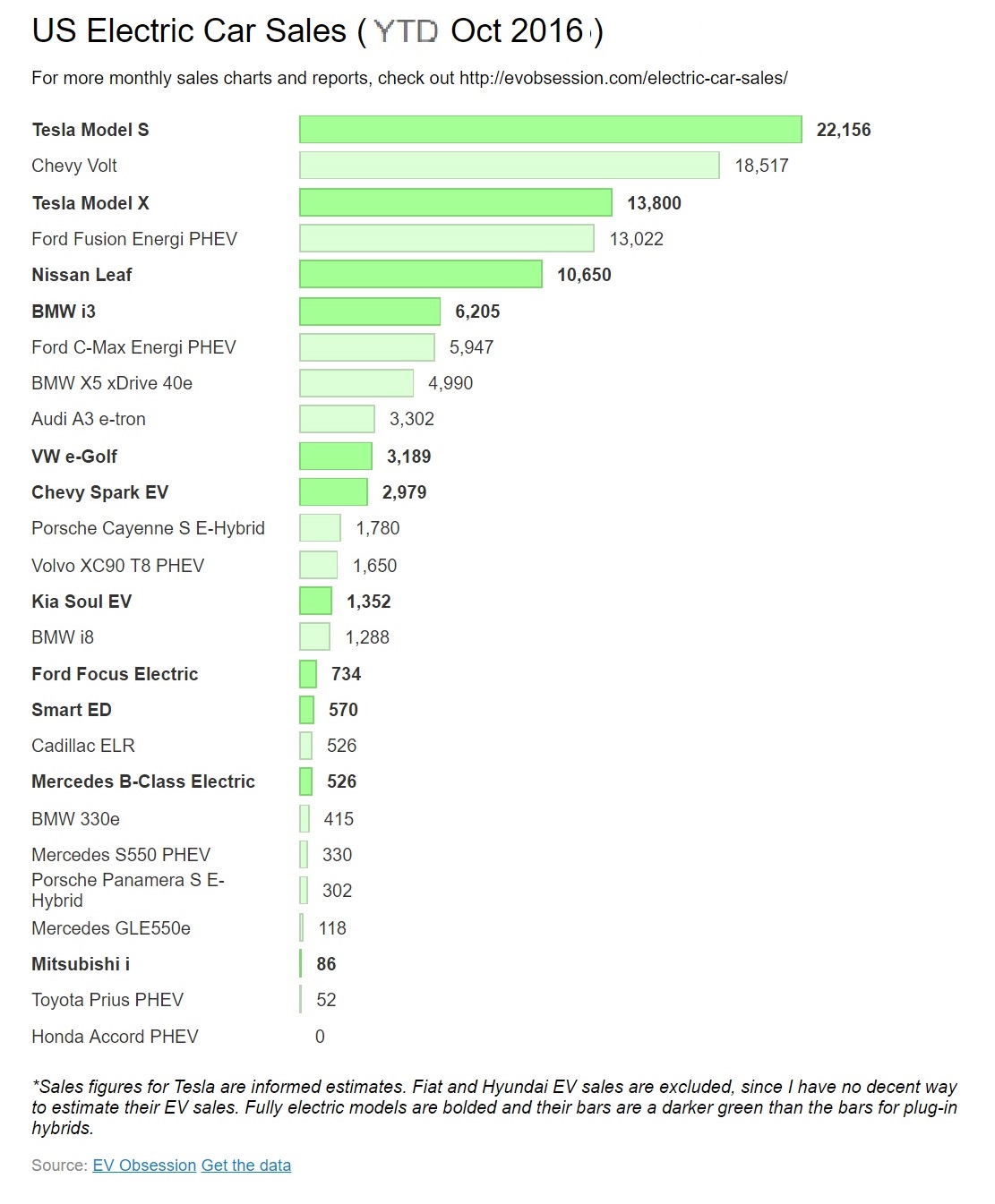 According to the Energy Information Agency (EIA), in 2013 battery electric vehicles (BEVs) and plug-in hybrid electric vehicles (PHEVs) accounted for approximately 0.07 percent of the 226 million registered vehicles in the United States. Although this is a very small fraction, sales of electric cars are steadily increasing, and in 2016 sales were up 26% over the prior year. Many of the critical disadvantages of BEVs in comparison with gasoline powered vehicles, including limited range, battery recharge time, lack of charging stations, and high price have been rapidly disappearing with advancements in technology. And the entry into the BEV market of Tesla Motors has the appearance of being a game changer in the industry with their initial focus on high performance vehicles that are stylish and fun to drive. After creating excitement in the market, they have now turned to producing a mass market vehicle than can compete with gasoline powered cars on price. There is a wide range of scholarly views on whether BEVs represent the future of transportation. However, a cost competitive product with superior performance that has no air emissions to contribute to pollution and global warming could well become the future of transportation, and possibly in less than 2 decades according the Bloomberg article "Get Ready For Life Without Oil".

According to the EIA, Americans owned about 70,000 BEVs and 104,000 PHEVs in 2013, or approximately 0.07 percent of the 226 million registered vehicles in the United States. Although a very small fraction, sales of electric cars are steadily increasing. Figure 1 shows the rate of BEV and PHEV vehicle ownership per state in 2013, with California being home to almost half of all the nation's plug-in vehicles at about 5 out of every 1,000 registered vehicles.

Although BEVs were once the preferred form of motor vehicles, sales of BEVs peaked in the United States in the early 1910s, and internal combustion engine (ICE) vehicles have been the dominant source of transportation since. See OWOE: What are the different varieties of electric vehicles?. Video 1 includes an interesting history of EVs and postulates on reasons why ICEs won the early battle over EVs to dominate the market. Traditionally, BEVs have suffered from several critical disadvantages over ICE vehicles. Figure 2, which is now several years old, compares some of the features of a BEV versus a gasoline powered vehicle. With recent advancements in technology the gaps shown here are rapidly closing: Video 2 from Transport Canada describes how a variety of organizations are working together to make sure the support infrastructure for EVs is available and why EVs make sense today on Canada's roadways.

On the subject of fuel cost, Figure 2 indicates 2 cents per mile for the BEV versus over 12 cents per mile for a gasoline powered vehicle. Of course, this comparison is predicated on the cost of gasoline vs utility provided electricity. If you take an efficient small car, such as the Ford Focus, with a combined city/highway mileage of about 30 mpg at $2.50/gallon for gas, fuel cost is approximately 8 cents per mile. A comparable hybrid electric vehicle (HEV) such as a Toyota Prius with about 50 mpg combined average has a fuel cost of approximately 5 cents per mile. Thus, the BEV fuel cost per mile is a factor of 2.5 to 4 less than a comparable vehicle running primarily on gasoline.

Fuel savings have been the primary means to offset the traditionally higher initial cost of an electric vehicle, although the mechanical simplicity of a BEV will also result in savings on repair costs over the life of the vehicle. Not long ago industry experts predicted that all-electric cars would become cost competitive with gasoline powered cars at gas prices of $2.50 per gallon in about 10 years, with the key enabler being reduction in battery cost. However, the rapid pace of technological advances in batteries has brought that day much closer. Tesla's Model 3 and General Motors' Bolt, which are intended as mass-market vehicles that can compete on price with similar gasoline powered cars, are due to start delivery in 2017.

Figure 3 plots year-to-date sales of the approximately 30 models of BEVs and PHEVs available for purchase in the United States as of October 2016. This represents an increase of about 26% over the prior year, and these vehicles are approaching 1% of all vehicles purchased in the US. If the Model 3 and Bolt can live up to their expectations, and other manufacturers achieve their plans to increase sales of their EVs, this rate of increase should continue or possibly even increase. At such a rate, EVs will take over a significant share of the motor vehicle market in a relatively short period of time and solidify their claim to be the future of transportation.

It should be noted that there is a wide range of scholarly views on whether BEVs represent the future of transportation. For example, the article "Can battery electrics disrupt the internal combustion engine? Part 1: No" concludes that BEVs won't displace ICE vehicles if a true price comparison is made, while a newly-published study by MIT researchers, "Study: Low-emissions vehicles are less expensive overall", shows that when operating and maintenance costs are included in a vehicle's price, autos emitting less carbon are among today's market's least expensive options, on a per-mile basis (see Figure 4).


Bloomberg "Get Ready For Life Without Oil"

Design your own! - Design a floating offshore oil and gas or wind platform with the unique and innovative OWOE platform sizing tool.
Google's Project Sunroof
Visit Google's Project Sunroof web site to get a quick and easy estimate of your house's potential for solar roof panels.
Solar panel and wind turbine power calculator
Determine the amount of energy produced by a solar panel or a wind turbine anywhere in the world.